"..simply superb leaving you anticipating the next Andy Cowan date." 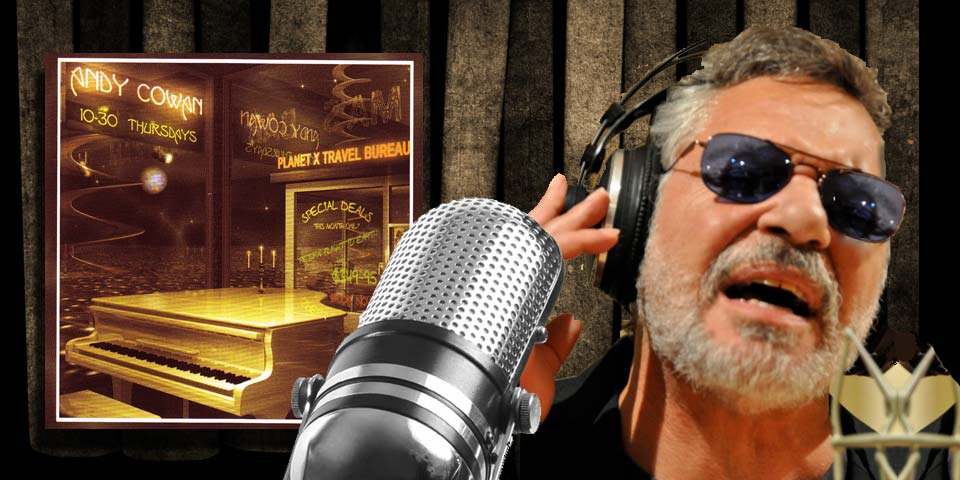 "10.30 Thursdays" was nominated for Blues & Roots Album of the Year at the Aria Awards 2001 and remains a timeless standout album, representative of the best of Aussie soul blues.

Tom Waits, Van Morrison, Dr. John ... singers and songwriters who dig deep into the well of soul, blues and jazz and keep coming up with passionate, articulate albums for grown-ups. Add another one to the list - Melbourne's Andy Cowan.

Being an Australian, Cowan hasn't had the chance to make album after album like his better known contemporaries, but that's not to say he doesn't blaze with a special talent. And Cowan is making up for lost time, touring constantly in the last two years and delivering two strong albums.

This is the one that should really spread his reputation, establishing his credentials as someone who can capture all that power he generates as a live performer on tape.

The album was recorded at Cowan's house earlier this year assisted by top-notch players such as Kerryn Tolhurst (guitarist, producer and former member of the Dingoes) and his partner in live work, Sunshine Coast harmonica player Doc Span (who flew down for the sessions and slept underneath the piano!).

R & B has always been at the core of Cowan's work over the years as a sideman with the likes of Kevin Borich and Renee Geyer, but it is the emotional quality of his earthy voice, soulful piano-playing and the diversity he displays as a songwriter and interpreter that have helped him make an album of this class.

"Never Look Back", for instance, is a stomping blues number with Cowan singing in the style of Ray Charles, but that's just the start of the story.

"Higher Love" is a majestic, gospel charged tune that wouldn't be out of place on a Van Morrison album: while "Trouble" is a smokey, emotion-charged ballad. "Move a Little Closer" is the kind of late-night sound you could imagine floating enticingly through the doorway of some New Orleans club,  while "Just Can't Hold On" is a soul ballad that sounds tailor-made for some future Geyer album.

As anyone who has seen Cowan on stage knows, he is also a strong interpreter of other people's songs, and his previous albums have included material from the likes of John Martyn and Mose Allison.

He shows immaculate taste this time around, including excellent versions of Wait's "Jersey Girl" and Jimmy Webb's "The Moon's a Harsh Mistress", accompanied just by his piano and Peter Grayling's lyrical cello, and a hypnotic reading of Jimi Hendrix's "Little Wing".

It's no easy skill to take classic tunes like those three and to find fresh nuances in them, but all those years of the hours on the road, the power of the songs he loves, the tears and the laughter, all those "10:30 Thursdays", all pay off here.

We don't seem to value experience much in Australia's music world. But take a listen to something as good as this and you realize that we should.

A fixture on the Australian music scene, Andy Cowan is known as "King of the Keys". His style massages the soul-blues-R&B idiom in an acoustic jazz format. Following classical piano studies, he began exploring improvisation and absorbing musical ideas from soul, blues and folk artists, developing his very own signature style that has matured over time.

From his late teens, Cowan has been in demand as a session player, hired gun and arranger. In the late 90's he embarked on a solo career. Success came almost instantly. His 2000 release One of These Days was named Album of the Year at the Vic-Tas Blues Awards.

Recorded at his own house, the self-produced album features Cowan on grand piano fronting a jazz-based entourage in emotive melodies and passionate renderings, interpreting a catalogue of material from Tom Waits, Jimmy Webb, Bob Dylan and Jimi Hendrix, sandwiched in with his own original compositions.

As a pianist/keyboard player Andy always wanted to be a guitarist, and Hendrix was one of his heroes when he was a young musician in the 60's, so it's no surprise to see him pay homage with an interpretation of Little Wing.

He's joined by tenor saxophonist Karl Hird, the acoustic bass of Howard Cairns and drummer Ronnie Ferella for an hypnotic reading of the song, with Hird providing a smoldering tenor saxophone bridge in counterpoint to Cowan's angelic piano work.

The album was originally released in 2001, is now recently re-issued on the "First Edition" label - a subsidiary of ABC (Australian Broadcasting Commission) Music. Cowans newest work is Sweet Release. He continues a busy touring schedule on the Australian continent.

"Train I'm On" and "One of These Days" were superb albums, focusing on Andy Cowan's remarkable abilities as a singer, songwriter and pianist. Yet those discs have been relegated to the files of lesser works by an artist who has finally realized his amazing talents.

Within 30 seconds of sliding over the desk this disc was in the player and Andy Cowan was revealing each and every facet of the make-up of his artistic being. He can do piano bar, he can pop, he can rock and he can roll with jazzy runs, he can sing-shout, he can whisper and he can bend his voice to the moment. Cowan is the real deal and this is the complete package.

"Higher Love" opens proceedings - not Steve Winwood's, but Cowan's, a song as good as any by Winwood. There are numbers with a big band and backing vocalists, a couple featuring Cowan and cellist Peter Grayling, and still others with cohorts Howard Cairns (bass), Ronny Ferella (drums) and Karl Hird (saxophone). The closer is "Little Wing", shorn of the jazzy inflections found on the Bruthen Blues Festival disc of last year.

It is simply superb, leaving you happy and anticipating the next Andy Cowan date.

It would be nice for those of us here in Australia, fortunate enough to have experienced Andy Cowan's music, to selfishly keep him a treasured secret. As the recognition he justly deserves becomes more widespread, Cowan can be proud of the fact that he is independently progressing under his own terms. As a former keyboardist for a host of nationally acclaimed rock bands and pop artists, it has been the blues community up until now, that has largely comprised the bulk of Cowan's support base since he stepped into the spotlight in his own right. His gifted songwriting skills took Aussie blues to new heights with the release of "Train I'm On", and his distinctive interpretations of the inspiring music of Percy Mayfield, Mose Allison and Jimmy Witherspoon on "One of These Days" drew the admiring attention of the jazz fraternity. Like those artists, Cowan's music knows no boundaries. His new CD defies categorisation, yet while the music reaches new horizons, anyone who shares Cowan's Muddy Waters/Robert Johnson affinities could not help being moved by the magic he weaves throughout each and every song.

Although an artist of outstanding singularity, Cowan's songs would captivate fans of singer/songwriters such as Marc Cohn or Van Morrison. It is music of that calibre we are presented with here at the very least. Even the non-originals are stylistically moulded into Cowan's unique persona. From the rolling blues of the Danny O'Keefe/Bob Dylan collaboration, "Well Well Well", Professor Longhair's "Cuttin' Out" and a new recording of his own "Never Look Back", Cowan shifts into Tex-Mex mode for a soulful rendition of Tom Wait's "Jersey Girl". On Jimmy Webb's "The Moon's a Harsh Mistress", he forms a duet with cellist Peter Grayling, then utilizes his Big Mama's Door band behind a passionate reading of the Hendrix classic "Little Wing".

As well as composing eight of the songs, Cowan engineered the recording of "10:30 Thursdays", turning his Melbourne flat into a temporary recording studio complete with grand piano. The finished article is packaged in a tasteful layout, the informative liner notes providing track-by-track details of performers and times. As on previous occasions, a highly experienced team of players was enlisted for the sessions, this line-up being slightly expanded and varied. Rarely heard on Cowan projects, guitar parts are skillfully furnished by Kerryn Tolhurst and Geoff Wright, Jeremy Alsop alternates bass chores with Howard Cairns who steps in on acoustic bass and sousaphone, while Ben Grayson occupies the Hammond chair and Paul Williamson blows tenor and baritone saxes. Also in the reeds department is Karl Hird on tenor and clarinet, and adding the bluesy touch on five cuts is harmonica virtuoso Doc Span. To complete the streamlined ensemble, Andy Swann and Ronnie Ferella sit in on drums with Ray Pereira on percussion.

It is Cowan's original songs, dynamic vocals and rippling piano that are the album's major facets. Through the soul-drenched "Higher Love", "Just Can't Hold On" and "Born From a Star", complemented by five-part backing vocals, and the rhythm-and-blues soaked "Move a Little Closer" featuring some tearaway guitar from Wright, Cowan injects a profound feeling into his singing in a manner resembling the style of Ray Charles or Joe Cocker. On the tender ballads "Trouble" combining dexterous piano work with Grayling's sensual cello, and "Mama", textured by Tolhurst's emotive lap-steel, Cowan displays a deep commitment to his music. Set to a gentle, swinging rhythm, his beautiful "Chelsea Morning", co-written with Cairns, is a jewel in the crown, where jazzy piano licks are enhanced by a sublime tenor solo from Hird, and intermingled with Span's expressive chromatic harp. While his voice is more subdued than on previous outings, Cowan blends it bouyantly in the mix, appropriate to the larger backing ensemble and, moreover, to showcasing his quality material. As an emotion-charged singer/songwriter/musician of consummate versatility, Cowan stands tall among his peers. With compelling songs of lasting durability, this work of art merits pride of place alongside the finest Australian music achievements.