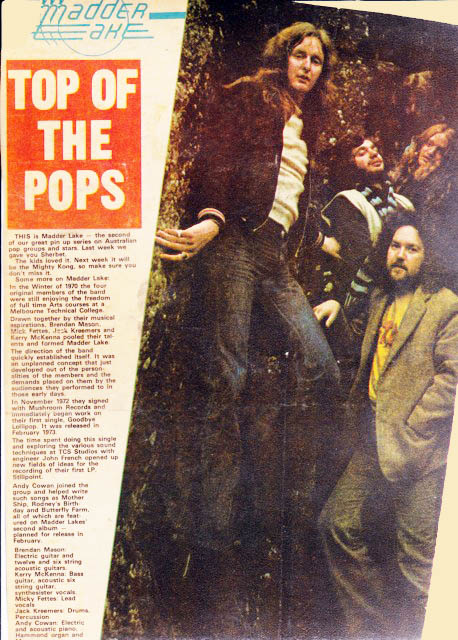 Madder Lake was one of the most original and distinctive of the "new wave" of Australian groups that emerged around 1970. They were also an important and popular part of the of the emerging Melbourne music scene. It's unfortunate that they're only known for their extant recordings -- their two excellent 1970s Albums and one "Best Of.." compilation. They were one of the first bands signed to the Michael Gudinski co-owned Mushroom Records which released their debut single, "Goodbye Lollipop" in February 1973, followed by the album Stillpoint in August. This contained their most recognisable single, "12lb Toothbrush". Their second album Butterfly Farm was released in April 1974, they left Mushroom after their last single, "I Get High" appeared in July 1976. A compilation album The Best of Madder Lake was released by Mushroom Records in 1978.

San Sebastian was a part-time rock band formed by Swinburne Institute of Technology (now Swinburne University of Technology, Hawthorn campus) Graphic Design students in 1968, including Kerry McKenna on bass guitar and Brendan Mason on guitar.By 1969 the line-up was McKenna, Mason, Mick Fettes on vocals, Jack Kreemers on drums and John McKinnon on keyboards, they were playing cover versions for the pub circuit.[1][2] Original material was introduced and, by late 1970, band members were leaving their tertiary studies to fulfil their bookings.

With a repertoire of progressive, psychedelic, blues music they changed their name, in early 1971, to Madder Lake—madder lake is a crimson-coloured water-based dye (alizarin) mixed with alum and used in painting. The Melbourne-based line-up of Fettes, Kreemers, Mason, McKenna and McKinnon were picked up by Michael Gudinski's booking agency, Consolidated Rock.

Madder Lake were influenced by British progressive rock acts, Family, Traffic and King Crimson.They were the opening act at the inaugural Sunbury Pop Festival in January 1972. As their popularity increased, they were one of the first band's signed to the Gudinski co-owned Mushroom Records in late 1972.

By 1973 they were a headlining act at the 1973 Sunbury Pop Festival, where they actually followed immediately after the hapless Queen, who were booed and bottled offstage ("The crowd wanted us" reckons Mick!) and Mushroom Records' first release was their debut single, "Goodbye Lollipop", in February. The single peaked at #15 in Melbourne  and made the Australian singles Top 40. Mushroom Record's first album release was the ambitious triple-live, The Great Australian Rock Festival - Sunbury 1973, which was released in early April, and included two Madder Lake tracks.

Madder Lake's debut album, Stillpoint followed in August, which peaked at #13 on the Australian albums chart, it spawned their most recognised single, "12lb Toothbrush" written by band members, Fettes, Kreemers, McKenna and McKinnon. 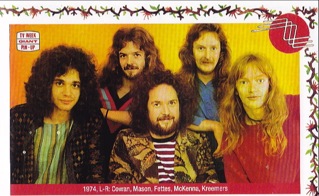 McKinnon had been replaced on keyboards by Andy Cowan (who was introduced to the band by future 'Skyhook' Bob Starkie - another former schoolmate of Brendan and Kerry's), by the time the album and its related single had been released. In 1974, the band recorded their second album, Butterfly Farm which was released in April but the album and its related singles had less critical and commercial success than earlier work.

British conductor, David Measham, who had worked with Rick Wakeman on his Journey to the Centre of the Earth, was based in Perth, Western Australia from 1974. He commissioned Madder Lake for a theme piece on Aldous Huxley's science fiction novel Brave New World, but the project stalled when funding from Australian Broadcasting Corporation (ABC) was cut-back and Measham's other commitments intruded. Cowan and Fettes left Madder Lake by late 1975, Fettes formed Bandicoot with comedian, Shane Bourne. 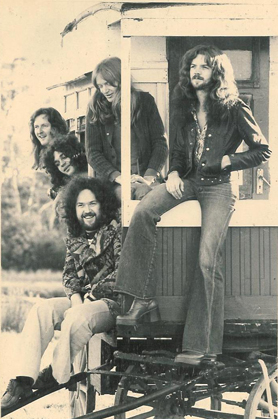 Fettes was initially replaced by Colin Setches on vocals but when McKinnon returned in early 1976 he took up vocals in addition to keyboards, meanwhile Ian Holding replaced a departing McKenna on bass guitar and the band recorded their last single, "I Get High" and left Mushroom Records. McKenna returned, now on second guitar, and Tony Lake joined on vocals but soon left. Although not formally disbanding, Madder Lake subsequently had numerous periods of low activity. Fettes returned in April 1978 for touring and Mushroom released their compilation album, The Best of Madder Lake in May, a new album was planned but Fettes left again in January 1979.

Madder Lake resurfaced with three tracks on The Mushroom Evolution Concert live album, to celebrate the record company's tenth anniversary in 1982. They returned to touring in 1996 and appeared on Mushroom 25 Live: The Concert of the Century released in 1998, after which Gudinski sold his interests in Mushroom to Festival Records. Madder Lake's two studio albums have been re-issued by Aztec Music with bonus tracks added, Stillpoint on 10 October 2008 and Butterfly Farm on 24 March 2009. As of May 2009, Madder Lake are Andy Burns on keyboards, Fettes, Kreemers, Mason and McKenna.

The band headlined the Queenscliff Music Festival in November 2008. 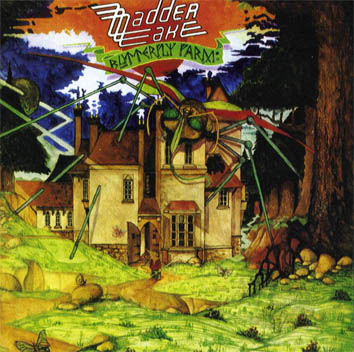